Owner of Columbia Investigations Melinda Kidder does her detective work by day, so her clients can sleep soundly at night.

My meeting with private investigator Melinda Kidder didn’t feel at all like a scene from a gritty film noir where a fedora-wearing, Cuban-smoking private eye types away while dames appear at the door to ask for help. Well, except for the fact that in her home office, Kidder had a screen filled with surveillance monitor feeds open behind her while we chatted.

Kidder is the owner of Columbia Investigations, so she uncovers secrets and catches criminals in their lies. She graduated from the University of Missouri — Kansas City with a bachelor’s degree in the administration of justice, and she’s a fourth-degree black belt, globe-trotting private investigator. Columbia is now her home, and she was gracious enough to share some of her tricks of the trade.

What peaked your interest in PI work?
I was adopted, so there was always a curiosity about my biological family, and then I did a lot of people watching, you know. When we traveled, I’d just watch people in the airport, learning to discover things about them through observation.

Did you ever find your birth mom?
I did. I just had this urge. I don’t know if God nudged me and said, “Hey, it’s time to find her.” I found my birth mom a few years ago, just before she passed. I didn’t have contact information, so I had to use my “secret squirrel skills” to track her down. It was a good reunion. Matter of fact she said, “What took you so long?”

How did you first start working as a private investigator?
I answered an ad in the paper. They [an investigative agency] were looking for investigators to help them with their expansion into Kansas City. It was me and some other guy who were picked out of over 200 candidates. I was in college, so either the other applicants were really, really bad or I did something fairly good in the interview.

We were following around delivery drivers from, like, big-box home improvement stores and making sure that when they dropped off lumber — like the lumber that was dropped off out here for my deck — that they didn’t swipe the lawnmower on their way out. It wasn’t super interesting, but somebody’s got to do it.

How did you decide to start your own business?
I think we’ve been here since 2006. We were here in Columbia, and it was around the time that the economy was starting to crap out. I had a Korean martial arts school, but people were less willing to put money into extras and, unfortunately, a lot of people saw martial arts as an extra. I also had a martial arts supply store online and same issue there: people weren’t going to classes and didn’t need supplies. I asked a PI here in town if he was hiring, and he said no but that I should go and do it on my own. So I did.

Under what circumstances do people usually hire a PI?
Sometimes the police won’t take a case if it’s civil and will say get an attorney or hire a private investigator. Obviously with cheating spouses or paramours, that’s going to be a civil matter, but child custody is also a big one.

Sometimes we’ll do garbology — trash archaeology — to find evidence of drug use in the trash and refuse. That is not my favorite job, but it can bring a lot of good information. You wouldn’t believe some of the things people throw away as far as their banking details, receipts and drugs. We found a whole bunch of heroin balloons in somebody’s trash, and that was very helpful for a child custody case and getting the child out of that situation.

Tell me about the different services a PI offers.
A broad variety. For example, witness locate, finding somebody who might have information on a case. We do surveillance and can go undercover, whether its private surveillance for individual citizens or for attorneys. Or insurance companies; say someone says, “I’ve hurt my back,” but then we see them lifting logs in their yard or carrying 50 pound bags of dog food. I’m a certified environmental safety compliance officer, so I have some technical surveillance countermeasures training, so I can do bug-sweeps-type stuff. We do accident scene videography; I’m working on getting my drone license. We work with a lot of whistleblowers. That’s what has us traveling a lot.

Back from another successful client meeting in Australia. We’re grateful for our clients, near and far, as well as the opportunity to experience such a beautiful country.

Where is the coolest place you’ve gone for PI work?
I would say Australia and Sweden are the big ones. We go to California a lot. Seems like there’s always a ton of stuff going on in California. Canada a few times. I guess it’s just word-of-mouth. We don’t do a lot of major advertising or anything.

What information do you have access to that an average citizen doesn’t?
I’m just a private citizen who happens to have a PI license, so I can accept money to investigate something. I still have to follow the same laws that you do. But some information providers, data brokers, will go ahead and provide information to people like me with licenses that they wouldn’t provide to you. And that information would be property records, more criminal records, address history that is going to be more accurate and more current than an online background check you can buy.

Do private investigators and the police ever work together?
Police don’t typically ask us to do anything for them; they’re 100% their own show. When there has been police involvement on a case or will be police involvement on a case, it’s usually a private client who contacts us for help. The police have been limited by policy on what they’re able to do or how far they can take the case sometimes. They’re overworked, underpaid, underappreciated. And sometimes people come to us as a last ditch to get answers that law enforcement were unable to follow through on for whatever reason.

What are some of the differences between real-life PI work and PI work in movies?
They show them breaking the law on TV, which we don’t do. It’s hard because you see them picking locks or taking documents from people they had no right to. It’s frustrating when I see that because I wish there was a really good portrayal of private investigators that didn’t have them breaking the law. People will come to a private investigator for the first time and say, “Well, we saw PIs hacking on TV. Why can’t you hack into my soon-to-be ex-wife’s email and tell me who she’s hooking up with?” Because that’s illegal. We can’t put a tracker on your sister’s shady boyfriend’s car. That’s a violation of his privacy.

What’s the best part of being a PI?
I do like having that “boom” moment when you get the information your client needs. When the client recognizes what you’ve done well for them is always a good feeling. Just making the client happy, especially when you know they’re at the end of their rope. That’s really gratifying.

What are the hardest cases to work on?
Cases where kids are being hurt are the worst. I used to come home from surveillance on those cases, and on my way, I’d run by my daughter’s school and do a “drive-by hugging” because they’re heartbreaking. Some cases can really take an emotional toll.

Columbia Investigations video records all of our process service attempts. This is vital in the event that a subject tries to claim they were never served. You’ll have proof of service and that the respondent is lying. pic.twitter.com/tbflPpbcw8

Is it unusual to be a female private eye?
Not so much anymore. I was talking to Stephen Brown, he wrote a book [The Complete Idiot’s Guide to Private Investigating], and he said, “yeah, the best investigators are women.” I guess people don’t take us to be as much of a threat. My surveillance vehicle used to be a green Dodge Grand Caravan, you know; I look like a soccer mom. And it was awesome. All the seats went down and I could sit in the back with my comfortable chair and my camera setup, and nobody ever suspected the minivan.

What life lessons have you learned though this work?
There’s a lot I can pass on to my daughter. The biggest one is don’t cheat. There’s no reason to, and if you don’t want to be there, don’t be there. People who are sticking around for the kids are fooling themselves and are teaching their kids to stay in loveless relationships.

What skills have you picked up through this job?
I use my powers for good not evil, but pretexting. Which is lying for a cause, basically, to illicit information from people. It’s not interrogation but more of a relaxed conversation to get people to open up. I had one guy whose daughter was being trafficked. And the trafficker would pick her up from school because dad put the trafficker on the safe person pickup list. So sitting there and interviewing this dad, and trying to pretend like, “Oh yeah, I get how hard it is working and being a single parent,” and all the while I just really wish the guy was in the ground. Those kind of cases are so hard especially when you totally do not believe what you have to say in order to get the information.

Tell me about going undercover and blending in.
You know, as long as you look the part you can get into just about anywhere you want to get into. A clipboard gets you a long ways. Wearing a hard hat can get you into just about anywhere, park anywhere. For disguises, nothing major beyond hats or clothing. No Mission Impossible masks. If you act like you’re supposed to be there, people want to avoid confrontation typically. If you look like you belong, both through attitude and dress, no one cares. 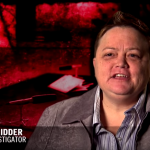